Dogs Both Goofus and Gallant, Plus Other Things We Avidly Love

Dames Nation, you continue always to delight us!

How have you managed it this week? Why, with your great responses to Our Very Bossy Proposal from two issues ago.

Dames Nation, on the day after Thanksgiving, we came to you with a Very Bossy Proposal, to downgrade America’s annual gorging on turkey (or ham!) and related foodstuffs, and to elevate July 4th in celebratory importance. You can read the full rationale, along with implementation strategies to refresh your memory.

We were particularly interested in hearing responses from our readership outside of the good old US of A, and as ever, you came through! We heard from a number of wonderful International Dames Nationals and are delighted to share their thoughts on how the major family holidays are observed in their countries.

First up, Soledad shares that in Uruguay, “the main events are on Christmas Eve and New Year's Eve. During the day it's too hot to do anything outdoorsy. Also, this happens on the second week of our summer school holidays (which go from mid December to early March), so families tend to be relaxed and forget schedules. Talking into the wee hours while letting children play around is fine, as nobody is going to school any time soon. Also, those who can afford to go on vacation, usually do so going to the Atlantic coast in January, so that is the SLOWEST month of the year.” This sounds positively dreamy!

French Correspondent Elizabeth says: “Here in France, there is no real Thanksgiving equivalent. Bastille Day on July 14 isn't really a family holiday (but fireworks!), so it's all about Christmas. EVERYONE here celebrates La Fête de Noël, regardless of their faith. It can cause some issues deciding who will host the big to-do (generally held the night before Xmas). But it's basically one-and-done for family holidays here.”

We also heard from Chiara in New Zealand, who reports that New Year’s Eve is spent on the beach. YES, PLEASE. A Canadian reader also chimed in, offering to fold our Thanksgiving into theirs, held in October. This is very kind, and enjoys the added benefit of eliminating Columbus Day from the calendar, too!

There was some great #dogs content on the internet this week. A roundup of highlights:

You know how once you fall in love with someone, you start seeing their work everywhere? That's what happened with Dame Margaret and comedy writerFran Hoepfnerthis week. First she wrote this hilarious and also REALLY INSIGHTFULFAQ withherself about why MAGIC MIKE XXL is the best movie of 2015for Bright Wall/Dark Room. THEN the Great Mallory Ortberg shared Fran's equally great essay about what happened when she invited all her crushes to join a secret Facebook group called "My Crushes."Fran is A DAME TO WATCH, friends.

Over atToday in Tabs, guest editor/legal genius Sarah Jeongdid a grim but well worth reading overview ofwhere we stand, legally, on the issue of privacy in the United States. You're going to want to go back and look at the puppies again once you've read this, but you'll also be like "I'm glad to be aware of what's up, even if it's suuuuuuuuper dispiriting."

And finally! Depending on which parts of the Internet you frequent, the first time you heard of world-famous adult performerStoyamay have been last week, when she accused James Deen, her equally-world-famous ex-boyfriend (also an adult performer), of sexually assaulting her while they were together. Butthis great piece from The Guardian, the first interview she granted after going public with her experiences, does an incredible job of showcasing her keen intelligence and all the hard work that she is doing to change our perception of sex work and make it safer for those who choose it. Again-- not an easy read, but a very important one.

“'We are working,' says the steady stream of messages that falls day and night onto my open laptop. 'We are working, say my friends and colleagues, and we are talking.'” -- Christina Lupton

You need to read Girl Gang Voices, a new feature from our lady-championing pals Amy & Ally. The first two reader-submitted first-person essays in this series are up, and they are nothing short of searing. In a world where Twitter is the only reason I even heard of now-convicted rapist Daniel Holtzclaw, self-published women’s voices are more important than ever. (This gets a STRONG-ASS COSIGN from Dame M., these pieces are remarkable.)

I love reading accounts of secret or lost histories, newly recovered (or re-recovered, as the case may be). In this category, a great longread from Valeria Luiselli on the role Mexico City’s rooftop culture played in the development of Mexico’s intelligentsia and transgressive subcultures during the 1920s & 1930s. (Via Rebecca Onion’s perfect gem of a weekly newsletter.)

Obsessive collecting of kitschy vintage Christmas lawn ornaments leads to a display that can, when illuminated, be seen from outer space. ← the best, weirdest not-quite sentence I have ever written. (Can we all agree to eliminate the term “blow-mold” from our vocabulary, though? SHUDDER.)

And finally, a Valentine to Avidly, my favorite channel of the Los Angeles Book Review. Avidly speaks directly to me so often that this newsletter could easily feature a weekly Let’s Gush About Avidly section. (Dame M.: It REALLY coould.) This week’s heartsong essay is In Praise of Distraction by Christina Lupton & it says everything I have been thinking about the real value of writing in venues like Twitter, Tumblr & group texts. By all means, wall yourself off to get things done when you need to, but those little bing-bong!s are also telling you you’re part of a community, and beckoning you to participate in it. (Bonus: the selection of FERRANTE as one of the essay's tags, all-caps the way I have instructed my autocorrect to format it.)

A Hearty Dames Thank You!

To Julia Carpenter, for featuring not one but TWO of Dame Sophie’s suggestions (Yayoi Kusama & The Cone Sisters) recently in A Woman To Know. This twice-or-thrice weekly newsletter is informative, sprightly, and a welcome addition to savvy inboxes everywhere. Plumb the archives & subscribe! Subscribe like the wind!
This Week in Hamilton 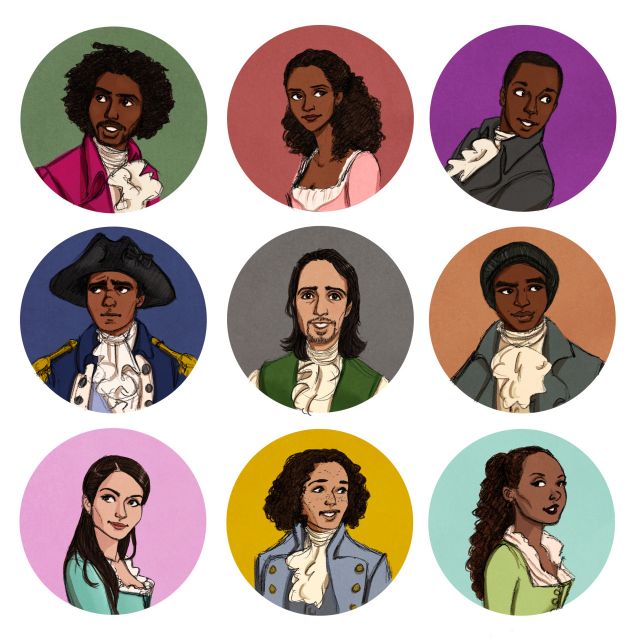 OTTERPOP you guyssssssssOver at Society6, The Artist Known As Otterpop has #blessed us all with some truly beautiful Hamil-themed artwork & household goods. The #1 essential: Her “Who’s ze best? C’est moi” pattern on either a mug or a throw pillow! (Also pertinent to Dames Nation Interests: Chris Evans in a flower crown, black Hermione, and Agent Carter fan art!)In the same vein, Jen Talley, who brought us “She Needed A Hero, So That’s What She Became” artwork, has some lovely Schuyler Sisters gear for you. Dame S. & her daughter will have matchy-matchy WERK shirts this winter, make no mistake!Dear Midwest, no need to schlep to NYC for your performance, Hamilton will come to YOU! Well, to Chicago, at least. This will delay a national tour, but could also give you yet another reason to prioritize a visit to Chicago!Show People with Paul Wontorek features a fun 2010 interview with Lin-Manuel Miranda on "In the Heights" & "Bring It On"LMM was on Jeopardy! this week, singing & rapping clues for the lucky, lucky contestants.Both your Dames are on record that there is only ONE correct way to sing the end of “Have Yourself a Merry Little Christmas”, and that is “until then, we’ll have to muddle through somehow”, but even we felt our resistance melting away just a tad during Billy Porter’s otherwise perfect performance of said song during #Ham4Ham.We are going to be off #plotting for the remainder of the month, but we will see you in 2016!!!