Love, ABBA, and a Treatise on Sophie's Favorite New Rake

Dames Nation, you are making us feel so loved!

You typically make us feel this way, but the opening of our ~*official*~ Two Bossy Dames store has brought it home even more delightfully than usual. It’s so fun seeing which products have been popular. So far, the carry-all pouchesare the runaway favorites. Given the lust in the hearts of We Your Dames for these pouches, their popularity with you, our Kindred Subscribers, is only natural-- they are just so useful, you know? Even more fun, though, are the one-off purchases. Someone bought a pack of three Two Bossy Dames notebooks, we hope for a SCANDALOUS three-volume diary. Another person got an art print-- to be the focal point for their Two Bossy Dames shrine?? WE CAN ONLY ASSUME! Thanks, again, for showing up for us at every turn. And if you want to tweet us about how you’re using your TBD merch, WELL, we are dying to know.

UM, probably because it’s only 9 days till our next livetweet! We will be watching the classic documentary Paris is Burning, which introduced much of straight America to drag balls and voguing, as well as such now-everyday concepts as realness, reading, and shade. It’s smart and sharp and forever timely and poignant as hell. It’s now on Netflix & we can’t wait to watch it with you!

When: Sunday, April 9 at 8pm EDT (GMT-5)
Where: Twitter - follow along using #parisdames. We'll be tweeting from @MrsFridayNext (Margaret) & @twobossydames (Sophie).
How: Netflix or a handy DVD

Madonna just WISHES she could.

Miscellaneous and Mirthful: A Motley Crue of Links

Would you just look at how proud and happy the Boy ABBAs are to sing the same syllable over and over again?

Whaaaat is the Deal With Dimples McGee?: A Brief Harry Styles Primer For Young Olds, by Dame S, Joyous One Direction Trash.

The face of an unrepentant murderer.

Trust me, you’re going to need this after next Friday, when his single “Sign Of The Times” has been released. He is going to be EVERYWHERE (on SNL, countless chat shows, and doing promotional interviews for the forthcoming & guaranteed harrowing Christopher Nolan WWII drama, Dunkirk, and on the cover of Rolling Stone and what have you) and there will be no escape. (A longer segment on 1D fandom generally will appear in our April 28th issue, thanks to the good offices of DamesPals Syazwina & Alicia.)

So here we are. For what does this newsletter exist, but to contexualize major cultural moments for even the most idly curious, making sport for our neighbors, and laughing at them in our turn? If I can plummet down this rabbit hole, so can you (and judging by the number of people privately asking me to help them do exactly that, I suspect you’ll enjoy it). Let’s gooooooo!

Hi. This is Harry Styles.

Yes, he is snuggling with Sir Ian McKellen. Seconds before, they were flirting. This is pop stardom in the 2010s.

Harry is a pop star, having first come to public prominence through his work in the British-Irish boy band One Direction. From 2010-2015, they recorded five albums, headlined four global tours, sold a million fafillion dollars’ worth of music & merchandise, and inspired fanfiction with word counts reaching into nigh-uncountable totals. The band went on hiatus at the end of 2015 and now they’re all releasing solo music. Harry is on the verge of releasing a 70s Brit-rock-inspired solo album, with his debut single slated for release next Friday. He released the cover art for that single, “Sign Of The Times”, this morning. The fandom went bananas, myself included, with some paragraphic yet breezy thoughts.

How did we get here, and why does it matter? Well, here’s one way & one reason. I liked 1D & their singles just fine, in that singing along on the radio but not seeking them out sort of way. Then one day, shortly after the Inauguration of President Cheeto, I heard their song “The Story of My Life” on the radio, and this song, which had previously been in the This Is An Acceptable Ballad column in the great musical spreadsheet of my mind, was suddenly pasted into the OMG THIS SONG IS SO BEAUTIFUL AND PERFECT MEN SINGING ABOUT DEEP EMOTIONAL ATTACHMENT AND CAREGIVING IS THE GREATEST THING OF ALL TIME column. In Trump’s America, garden variety healthy masculinity can sound like resistance (and honestly, we should all be so lucky as to have the taste & cultural criticism acumen of really smart teen girls). Your path may vary!

So. Herewith, a brief, link-drenched summary of the types of thoughts you might have while learning about this tuneful, funny, adorable Northern Scamp (stop me if you’ve heard this one before): 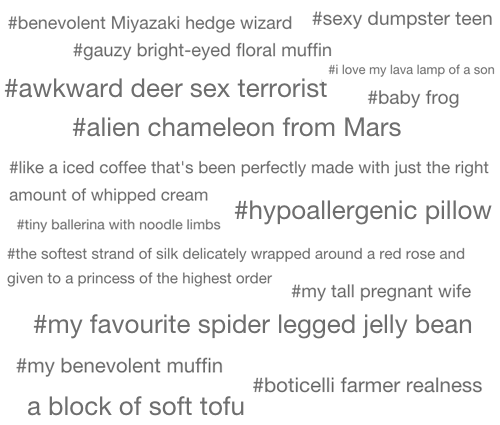 I’m not going to get more involved in explicating the dramatic & skillful album rollout tactics of the past week, but know that they show he’s been paying close attention to Beyonce’s BOOM, HERE IT IS PR methodology. He’s not at her level, but he’d clearly like to be, and the enthusiastic response of the fandom indicates that he may get there someday.

Come yell with me on Twitter about young Harold & his purple crayon by which I mean new music, novel take on 21st century manhood, and whether or not he uses a bullet journal to stay organized in his quest for world domination (he definitely does, I have decided). You know you wanna.