More Discussion of Boobs In Here Than Is Really Typical

FRIENDS!! Your replies to our birthday survey have left us all:

To the 102 (!!!!) of you who have already taken the time to respond: THANK YOU SO MUCH! Both the anecdotes and the data about likes, dislikes, and how you found us are _super_ helpful and we so appreciate you for sending them our way. As for the rest of you! We are going to be gathering replies tothis survey throughout the month, so head on over and share either an anecdote about how the newsletter has affected you, information about what you like about what we do, OR BOTH. We are preparing for the inevitable:

Sing Me a Song of A Dame Who Is Gone/Say Could That Dame Be I?

With Jaime, Claire, and their luxurious knitwear, there is an almost infinite amount to delight the eye in Outlander.

Based on the aforementioned survey results, it may be entirely redundant to note that Dame Margaret was on Pop Culture Happy Hour today, discussing Outlander, since so many of you seem to have found us through PCHH. HOWEVER, this episode was a particularly fun one that (1) also features beloved former Guest Dame Barrie Hardymon and (2) its discussions of the Starz show Outlander hits on a lot of subjects near and dear to this newsletter's heart: female desire and its problematic depictions in most media, nuanced love stories, beautiful people in gorgeous knitwear, Tobias Menzies, and more. Dame Sophie reports that it was a fun listen even though she does not watch the show discussed, but then it’s arguable that she loves Dame Margaret even more than you guys do, so your mileage on that suggestion may vary. A few links to pertinent things mentioned in the episode:

It really is absolutely spectacular.

Dame Margaret’s Konsumerism Korner: Buy Dresses So She Doesn’t Have To

Today, I am the computer and you, our beloved readers, are Cher.

As those of you who follow me on Twitter already know, I have a problematic addiction to the website eShakti, a purveyor of reasonably priced, beautifully made, and whimsically printed dresses. Since I spent this afternoon browsing their sale section instead of reading the links I'd hoped to share for the week, you are getting a round-up of my favorites from said sale. All cost less than $50 and all can be made custom to your personal measurements for an additional $9.95. I do not typically use the custom fitting-- too lazy to do my measurements-- but my straight size of a 14/16 usually works. If the dress is made from stretch fabric, or contains an elastic panel, I will got for a 14. If it does not, I opt for a 16-- something I buy very rarely in commercial stores, but something that fits me really well at eShakti. Their sale right now is particularly fruitful, so do browse around further-- my highlights are not comprehensive! eShakti has NOT paid this placement; their clothing just delighted my eye today and I felt like sharing. If you are entirely new to them, you should be able to register and receive a coupon for $25 off your purchase and free shipping. GOD SPEED AND GOOD LUCK!

My parents have a wonderful friend, Susan, whose mother was not really into the whole 1950s June Cleaver perfect housewife thing. So much so that one day after school, Susan & her siblings were delighted by her scattering a bunch of Hostess cakes on the kitchen table & cooing, “Look, children, Mother baked!” (Susan’s mom's carefree attitude: #GOALS) All of which is my slightly roundabout way of saying that this is going to be real brief because I am T I R E D this week and am saving my energy for the Harry Styles roundup below.

The dress in question.

~*~ Being an occasional round-up of the antics of His Grace, Harold Elizabeth Styles, Esq., once & future of One Direction, presently of Dunkirk and his forthcoming international tour of small venues. ~*~

I’m not going to bury the lede, friends: I hypothesize that Harry is about to be memorialized forever as a car in John Green’s forthcoming novel,Turtles All The Way Down. Let me explain. BuzzFeed has furnishedthe first chapter of TATWD on their handy website. This chapter reveals that main character Aza and her friend Daisy have a guilty love for “brilliant and underappreciated boy band”, also referring to them as “the infallible boys in the world’s greatest pop group”. Come on. That’s a very clear dog whistle to Directioners, who love to talk about the boys and their excellence.

Aza’s most prized possession is her car, a Mystic Teal Mica Toyota Corolla named Harold. Aza spent all $400 of her life savings on getting Harold roadworthy after years of him sitting in the garage, "so, in a way, Harold was the culmination of my whole being, at least financially speaking. And I loved him. I dreamed about him quite a lot. He had an exceptionally spacious trunk, a custom-installed, huge white steering wheel, and a backseat bench clad in pebble-beige leather. He accelerated with the gentle serenity of the Buddhist Zen master who knows nothing really needs to be done quickly, and his brakes whined like metal machine music, and I loved him."

Please consider the above, view the reasonably characterized as Mystic Teal Mica suit below & tell me this is not a 1D/Harry shout-out. Sorry, you can't. Everyone loves Harry, none can resist, not even America's biggest-selling YA author. 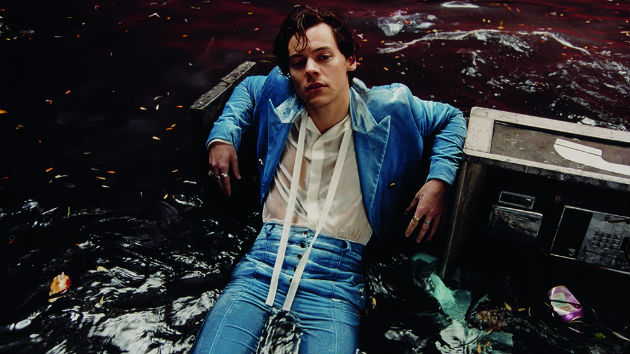 This couture-draped scamp.
Butter wouldn’t melt in his mouth,
though it does make a great shade for a suit.