Opulence, Dimples, and Our Lady of Perpetual Pettiness

….because THIS VERY SUNDAY, we will be hosting a livetweet of the classic documentary Paris is Burning! This indelible film, which introduced much of straight America to drag balls and voguing, as well as such now-everyday concepts as realness, reading, and shade, is essential viewing. It’s smart and sharp and forever timely and poignant as hell. It’s now on Netflix & we can’t wait to watch it with you!

When: Sunday, April 9 at 8pm EDT (GMT-5)
Where: Twitter - follow along using #parisdames. We'll be tweeting from @MrsFridayNext (Margaret) & @twobossydames (Sophie)
How: Netflix or a handy DVD 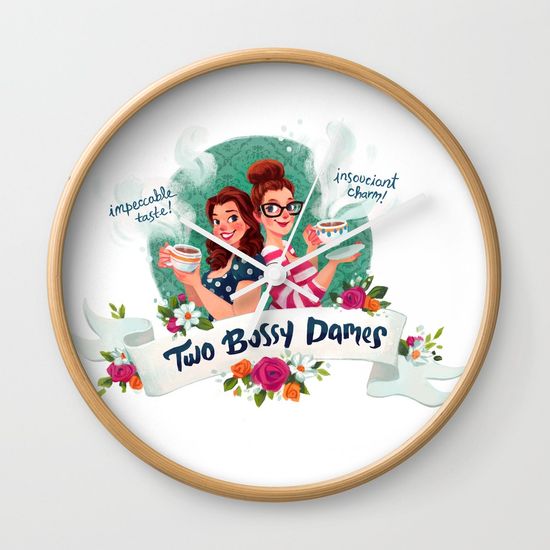 As of yet, no one has bought one of these wall clocks. But we have not yet given up hope that someone will.

This is the last time we’re going to shill OUR COOL MERCH featuring Simini Blocker's UTTERLY FLAWLESS LOGO in the newsletter for a bit. Three weeks in a row is bordering on craven. BUT!! Society6 is offering an artist opt-in sale this week, meaning if you follow this link here you can get 20% off all our merchandise ~*plus*~ free worldwide shipping, through midnight PST on Sunday, April 9th. And that seemed like something worth sharing. The carry-all pouches are still CLEANING THE FLOOR with the competition, but we have a feeling mugs might just start catching up. Pro-tip: the mugs make a GREAT receptacle for boxed rosé.

Harry Styles Assassinated All My Emotions & I Am Glad: A Memoir by Dame Sophie 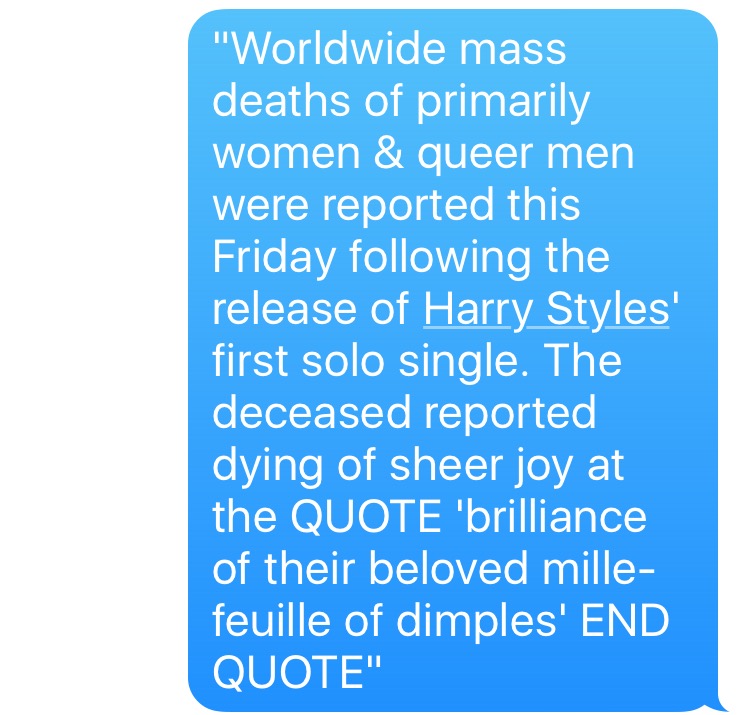 Ok, first of all, I want to thank all of the Dames Nationals who wrote in to tell us last week’s Brief Harry Styles Primer for Young Olds (now available for handy sharing on Medium) moved them in some way. There were even more of you than I anticipated, based on my highly unscientific general survey of my acquaintance. You are all most welcome! We will move onto some “Sign of the Times” yelling in just a moment, but because so many of you said the hilarious hashtags fans use to describe him were your favorites, I will share with you that I keep a note on my phone to keep track of the silly ones I come up with. I’ll sprinkle a few of them below.

Well, it happened. I listened to “Sign of the Times”. This song took my heart, shredded it, carefully reassembled & then refilled it. Truly, the ballsy choux pastry of our dreams has Done The Thing, entirely his way. If you haven’t listened to it yet, go ahead. I’ll wait 5:42. Yes, the #1 pop song in 90 countries this week is a nearly six-minute, spacily glamorous stadium rock power ballad about the apocalypse and the profound need for human connection. You will feel the smudged eyeliner applying itself to your lids while you sway gently in your kitchen, tears streaming down your face and lighter held aloft.

There are a bunch of hugely appealing influences shining through on this song - ones that struck my ear immediately, such as “Space Oddity” and “Life on Mars?” Listen a couple more times and you’ll hear what Harry & his team have been listening to and loving: everything from Beyonce’s “XO” and the Flaming Lips’ “Do You Realize??” to “Hey Jude” and “Purple Rain”. This definitely did not make me cry a lot, no sir. Did you hear the huge drums that come in at 1:18? They are very nearly the same as the wild drums just before the chorus on 1D’s debut single “What Makes You Beautiful”! (They’re not exactly the same, as a very helpful Twitter correspondent noted, but they’re close). Natalie Fisher, writing for Hypable, even noted a hint of “It’s Quiet Uptown” from our beloved Hamilton in the mix.

The beautiful part is that while you can hear echoes of a host of influences, “Sign of the Times” synthesizes them into something new and wonderful that, even as it tears up Top 40 radio, would also fit in perfectly on any Classic Rock station’s heavy rotation playlist. Writing a timelessly anthemic, simultaneously uplifting & soul-destroying singalong about death at age 23 for your debut single? Sure! No sweat.

Can we talk about his voice for a minute? This sexy chesterfield’s voice has matured. The lovely, emotive rasp of his mid-range is surer, and now he’s added a beautifully vulnerable and fine falsetto to the mix. Bliss. The glorious, aching frenzy of the song’s final crescendo takes me to the same celestial emotional realms as Mary J. Blige’s performance of "No More Drama" at the 2002 Grammys. I just. Listen, we are neither ready for nor worthy of next week’s Saturday Night Live performances, but by god, for the sake of The Most Extra Boy Who Lived, we are going to try. 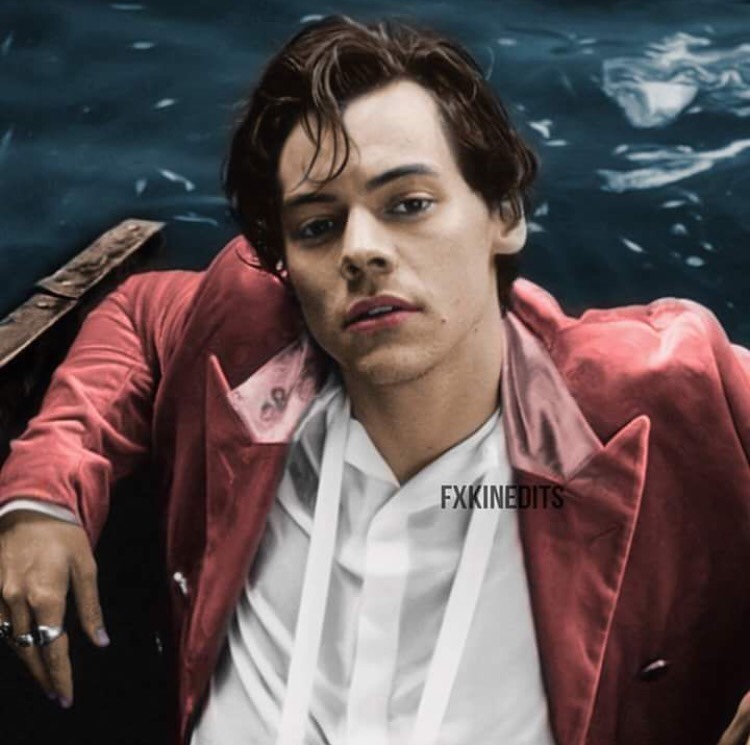 In addition to the works of this velvet-blazered satyr, a LOT of great music has just come out!

Some of it could even conceiveably leave you doing this very dance, like Young Harry.

And Few Non-Musical News Items Worthy of Your Attention 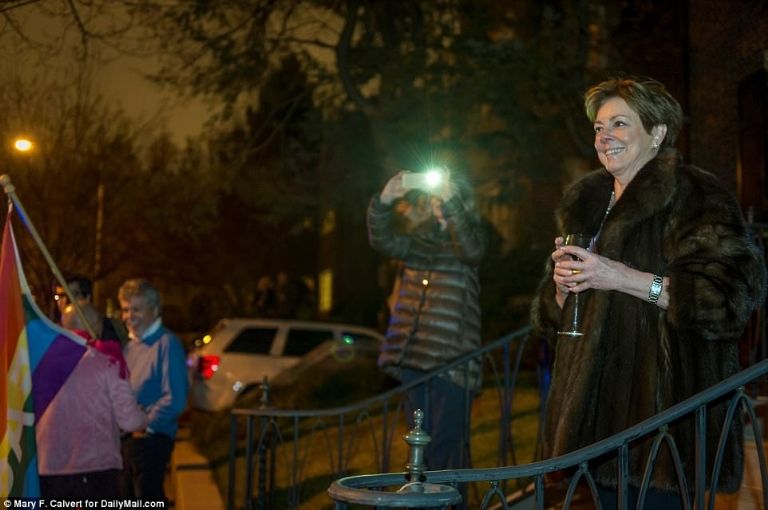 All hail Our Lady of Perpetual Pettiness.

What can we say except "you're welcome"?