Today, sisters and smarties Laura Blanton and Kathryn VanArendonk are busting into this newsletter to bring you some deep science knowledge and delicious science GIFs. So hold onto your safety glasses!

KV: Hi Laura! Are we going to SCIENCE UP THIS PIECE?!

LB: YEAH! Science is the best. Except sometimes when it’s the worst.

KV: That is kind of why we are here today, taking over this great newsletter that we love so much! First, can you tell me a little bit about who you are and why you are interested in science and its awesome/terrible nature?

LB: Sure thing. HELLO, EVERYONE, I’m Laura, a recent Genetics PhD grad. I’ve done research on the bacteria that live in your gut, and currently study the X and Y chromosomes.

KV: And you’re, like, very fancy and have papers in Science and whatnot.

LB: That’s beside today’s point, but thank you for being a proud sister.

So you’re going to tell me a little story about mice.

We know these are hamsters, but we hope you’ll forgive us.

LB: Yes -- today’s point is really to talk about some of the things I’ve noticed while doing research over the past few years, and, upon further investigation, have found to be a legitimate problem across a lot of biological research.

KV: <very Seinfeld voice> so what is the DEALLLL with MICE in science?

LB:  Before we get into this, I would like to insert a small disclaimer that research with animals is a real and important thing, but it also has ethical responsibilities and concerns, and I take those super seriously. If you enjoy the benefits of modern medicine, though, you’re benefitting from research done in animal models. They’re used in basic science research and throughout the process of drug development.

So - the thing I was raging about at our dinner is that the research I did all throughout my PhD was done on only (and i repeat, *only*) male mice. That was the thing I was incensed about.

KV: And I heard this, and thought… huh. Why does that even matter, though? They’re mice.

LB: Well, male mice are fundamentally different from female mice. Beyond having different reproductive organs, they have different levels of hormones throughout the body. Plus, think about it: since every single one of your cells contains your complete genome, every cell has a sex (that is, your XX or your XY chromosomes). So even though some random lung cell might not seem to have much to do with whether or not you’re biologically male or female, your sex genes are still embedded in it. And we know very little about how any cell’s underlying sex chromosomes affect they way they work. All my findings during grad school were based on an XY biology, but I have no idea how my experiments would have gone in females -- basically a whole half of the mouse species was ignored.

Also a hamster, not a mouse

LB: Even beyond the fact that gut bacteria do differ between men and women, research done in only one sex of animal model may have ramifications later on. Animal models are used to find candidates for drugs and therapeutics, and if they’re only based off of male biology, they might not fully work for a female biology (for example, out of ten drugs pulled from the market between 1997 and 2001, eight were withdrawn because of negative effects in women). Women have different metabolisms, different immune systems -- but really, the full extent of how male and female biology might differ is unknown, because people haven’t taken the time to figure it out.

What even is this? Is it a hamster, or is it a gerbil or something?
[Ed. note: This is the Dramatic Chipmunk, which is actually a prairie dog.
He's from a 2001 Japanese morning show.]

KV: Wait. Wait, what the HELL? We don’t even KNOW how some of these diseases are different between the sexes?

LB: Nope. More people are finally starting to look at sex differences, though. Take, for example, a phenomenon that isn’t strictly a disease, but affects everyone: the response to pain. As NPR writes in this piece about Jeff Mogil’s research at McGill University:

“By studying both sexes, Mogil and his colleagues found that different cells communicate pain in female and male animals. They experienced pain in the exact same way and to exactly the same degree, but the pain is produced and modulated using different circuits," Mogil says.

If the same is true in people, that difference could have big implications for a class of painkillers meant to work by blocking the cells that are more active in men. "The prediction would be those drugs simply won't work at all in women. It's not that they'll work better in women and worse in men. It's that they won't work in women period," he says.”

KV: That is MESSED. UP. So what you’re saying is that at this early stage of research, when people were figuring out essential things about how diseases work, how bodies work, they were only using BOY MICE and so they didn’t even bother to fucking CHECK how it worked in the LADIES. WTF.

LB: To be clear, lots of scientists have also used female mice. But it’s also been super common to group male and female mice together (so if there were any sex differences, they wouldn’t be represented in the statistical findings). And there are huge swaths of research disciplines where they do predominantly use male mice. 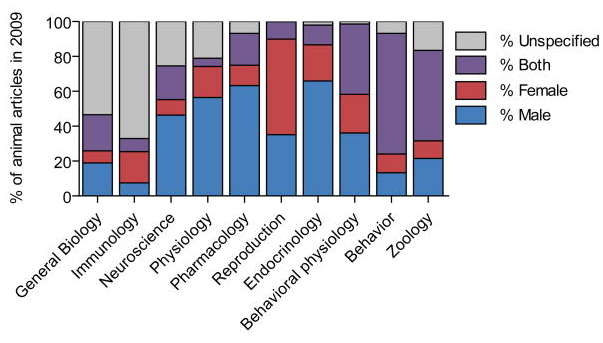 KV: (Wait wait, sidebar. What do they even do with all the lady mice they’re not using?)

LB: (...Probably euthanization, without being used for any experiments. Unless they were used to make more male mice.)

KV: (THAT IS SO MESSED UP.) So, by the time drugs get tested for actual humans, though, there’s tons of research that does take sex difference into account, right?

LB: It’s a lot better these days than it used to be. Now, the NIH has mandated that clinical trials must use both men and women (btw, this was only mandated in, like, the 1990s). But for many years, women and children were waaaaaay underrepresented in clinical trials. This wasn’t necessarily out of malice, but out of the worry that the drugs would lead to side effects in pregnancy (read: patriarchal concern that ladies might be not able to handle it). Now, though, there are more women than men that participate in clinical trials. WE GOTTA LOTTA CATCHING UP TO DO.

KV: Let’s summarize. Lots of research about how diseases work was originally done on male mice, or it was done without any kind of statistical measurement of how the diseases might differ between the sexes. And now, even though we KNOW there are differences, there are lots of diseases that we really only understand through a sex-blind model (and by sex-blind, of course, I mean - usually tilted toward the dudes).

LB: Broadly, yes. Some good examples of this are cardiovascular diseases and autism. These diseases often appear differently in women, but because the gold-standards for diagnosis and treatment are based off male-biology, women are likely falling through the cracks.

Want some more fascinating and disturbing examples of
how sex bias in science has led to real-world ramifications?!?!
Well, aren’t you in luck!

“One of the reasons that progress has been so slow for the world's poorest women is that we have very little data about them. There are still women who live and die entirely unrecorded. They leave behind no birth certificate, no death certificate, and no data about the struggles and challenges they faced—whether they had the chance to go to school or earn an income, whether they suffered from violence or disease, whether they died preventable deaths.”

Kathryn’s Not A Scientist, But She Still Feels Some Lady Rage

Laura inherited all of the family fondness for lab coats and pipettes and terrible puns, so I’m leaving the science-specific stuff to her. But I have my own favorite soap box on this particular topic!

Come talk to us about furious discarded lady science mice! You can find Laura and Kathryn on Twitter and you can check out the TV podcast Kathryn co-hosts with beloved OG Dame Margaret.