By which we mean marvel at 50 Years of David Bowie’s Hairstyles all in ONE GIF!, all drawn (and available to purchase in color or black & white!) by the supremely talented Helen Green, who is only 22, prompting us to ask: what are we doing with our lives?!
All this to honor the one and only Ziggy Stardust, who turned 68 on January 8th. You can toast him with this perfect mug.

Oooh, come on, you rock & rollers!

This Week In Ladies We Love
(AKA We're Going Down to Suffragette City!) 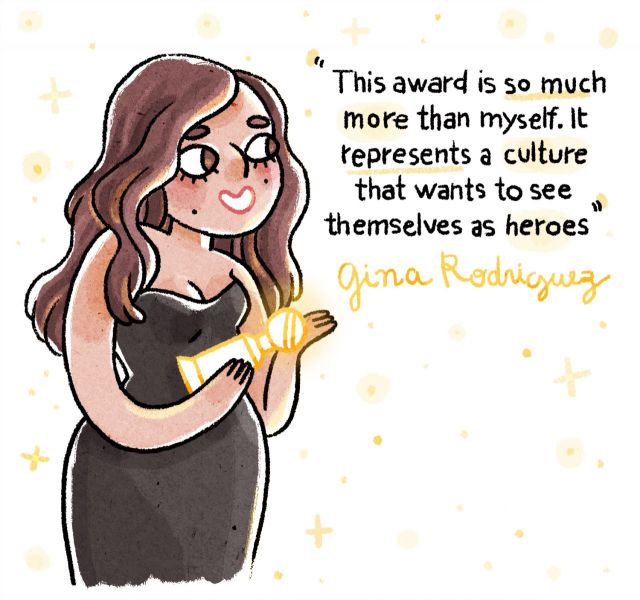 So many ladies are doing so many great things! All the time! We love them always, of course, but this week, they are shining especially bright. What talented ladies would you recommend to us? Drop us a line or tell us all about it on Twitter.

Dame Sophie's Thoughts on Accents! Class! And Self-Presentation!
(AKA Fashion! Turn to the left!)

We recently learned that Mike Rugnetta, charming & erudite host of PBS Idea Channel (we’ll wait for you all to subscribe. Ok, you’re back? Great!) also hosts a podcast about sound, called Reasonably Sound. His most recent episode is about the differences between English and American accents, and Sophie wrote him about a million tweets in reply, because She Has Thoughts.

One of the things Mike talks about is how most English* accents became non-rhotic. (If you have a non-rhotic accent, you don’t pronounce the letter R when it’s in the middle or at the end of a word. In Canada & the US, most of us speak rhotically, pronouncing all of our Rs.) Surprise, surprise, rhoticity, when it first developed, was a class thing! Speaking rhotically became an upper-crusty way of speaking in the late 1700s - early 1800s in the UK, but that style of speech didn’t become a trend in the US, which was experiencing accent shifts of its own due to various waves of immigration throughout the 19th & 20th centuries, and now, here we are: we say toMAYto, they say toMAHto. (And drawrings.)

But that’s not the whole story! (Of course, neither is this.) Also popular at the time of the rhotic accent fad was an affected upper-class RLW substitution, perfectly captured by Corin Redgrave as the hideously status-conscious Sir Walter Elliot in Persuasion. Hear how he pronounces "vigor", "horribly", "spring", "Baldwin"? He’s slurring every which way! Oooh, so fancy! England does have at least one notably rhotic accent even now, the one found in the geographically remote West Countrycounties of Somerset, Devon**, Dorset, and Cornwall, whence comes what many of us now think of as The Pirate Accent. By all means, join us down the rabbit hole with this Wikipedia entry on Rhoticity In English.

Class is a huge, HUGE part of accent & speech. In the US, we like to pretend it's not, but it definitely is, and sadly, we rarely see much accurate regional accent diversity on TV. The UK does much better with accent representation on mainstream shows (see, off the top of my head: Gavin & Stacey, Doctor Who, where lots of planets have a North, and Downton Abbey). And it's a shame because we have such great regional accents and they all get smoothed out for broadcast! For example, Sean Monahan’s videos showcase the Philadelphia Accent (also the South Jersey, Delaware, and quite a bit of Maryland accent) in all their vowel-flattening, internal consonant-swallowing glory. Fred Armisen recently did five minutes of improvisation highlighting the many accents of New York City. And that’s just one 240-miles stretch of the Northeast! How many subtle variations exist all over the place?! It’s dizzying to think about.

One final thought, a thing Sophie wonders about a lot: it’s a cliche that Americans generally find British accents of all kinds charming. So do Americans fundamentally hear the speech of (originally working class) musicians like Adele, Oasis, and the Beatles incompletely, because we don't hear all the subtleties of class differences between their accents and that of someone like Nigella Lawson (who has a very upper class Home Counties accent)? It’s something she can hear now, but if she weren't married to someone who grew up striving working class in England, she might not have bothered to learn about it.

* Not to be confused with British - indeed, accents throughout Wales, Scotland & Northern Ireland are often non-rhotic, filled as they are with beautifully trilled & rolled Rs.
** Where Dame Margaret studied for a year at the University of Exeter, alma mater of both Joanne K. Rowling and Thom Yorke. Neither of whom--tragically-- have the Pirate Accent Dame Sophie mentions.

Miscellany We Think You Will Want To Know More About
(Which could easily have been the title of this entire paragraphic, yet breezy enterprise)
(But we wouldn't want to put you Under Pressure to read more, ha!)

How the 19th century explosion of Krakatoa affected The Scream by Edward Munsch (and inspired one of Betsy Bird and Dame Margaret's favorite classic children's books, The Twenty-One Balloons by William Pene du Bois.) What happened when Councilman Kirby Delauter of Frederick County, Md. reamed his local paper for making "unauthorized use" of his name. (Spoiler: It did NOT discourage them from using his name.) Why dogs make the best Ball Boys. The hidden costs of public puking. Why women named Abigail, Eleanor, Nanette, Margot, Johanna, or Julie are statistically more likely to be reading this newsletter right now (h/t to Dame Sophie's wonderful sister, Sarah!). The glory of watching 25 years of David Suchet's Hercule Poirot.